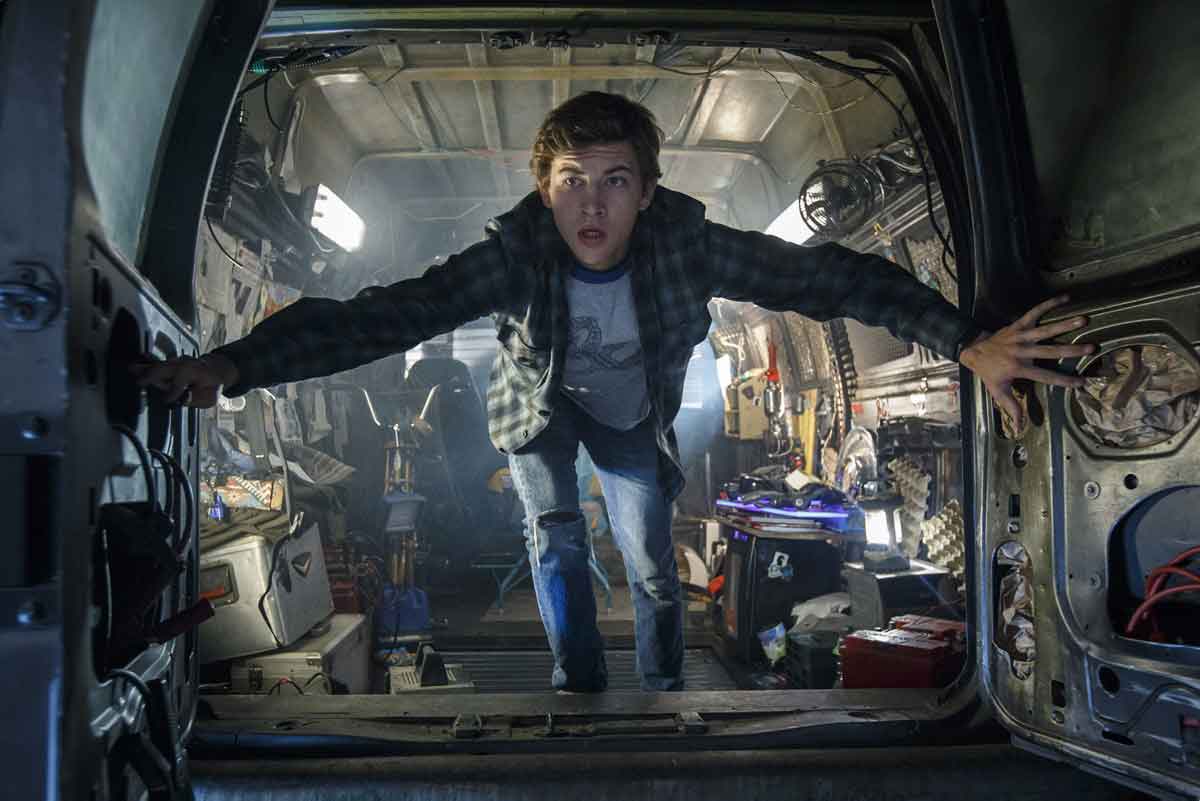 I’ve seen the future, and it is terrifying. Not in the Cormac McCarthy, gangs of roaming cannibals sense. No, the future of Ready Player One is much more disturbing. For many years now I have been giving out about the proliferation of comic book movies that degenerate into a button-mashing computer game in the final act. Now with Ready Player One Hollywood has figured out how to make an entire movie that looks like a button-mashing computer game. Never in my wildest dreams did I think that Steven Spielberg would be the one to make it.

Ready Player One is set in 2045, where the Willy Wonka of start-ups James Halliday (Mark Rylance) has created a virtual reality world called The Oasis which allows the miserable peeons of Columbus Ohio to escape their trailer trash skyscrapers for 23 hours a day. Wade Watts (Tye Sheridan) is using his online alter ego called Parzival (a Hanna Barbera version of Jon Bon Jovi) to look for something hidden in something that will allow him to do something when he finds it. A rich bad guy (Ben Mendelsohn) is also looking for this something and will stop at nothing to prevent Parzival from finding the something. Because something.

When a VR avatar is “killed” in The Oasis, they lose access to their online cash build up. “Coins” start spewing out of some body part (reminding us of the obscene amount of very real money that this mess must have cost), but there is no effect on the real-world characters apart from starting the game again. Therefore, there is no sense of peril or danger in any of the drama, and no real consequences attached to any of the action.

Pick a random sequence from any Spielberg movie and it could be used as a masterclass in how to shoot action in the service of story. Nobody frames action better, but there’s zero evidence of that here.

Ready Player One is very much like watching a feature length version of one of those 20 second IMAX or THX intros that pay in front of a movie. WITH EVERYTHING DIALLED UP TO 11. ALL THE TIME. It is relentless.

There’s no shade here at all. It’s utterly soulless. Bar one single scene shot against real landscape with two flesh and blood actors, Ready Player One is hollower than Donald Trump’s cranium. Pop culture references are piggy-backed on top of more pop culture references with no purpose other than to distract from the lack of any real story. Remember John Hughes movies? They were so eighties. Back to the Future was good, right? Well, here’s the car. Look, there’s a half-second shot of Beetlejuice. You remember Beetlejuice. This endless empty nostalgia is of no use beyond playing a very long game of “I get that reference”. It all means nothing.

Spielberg should be the one setting the pace. Raising the bar. Not competing on the terms of Zack Snyder and (lord forgive me) Michael Bay in a race to the bottom. If you’re looking for a visual metaphor for Ready Player One, try to imagine Martin Scorsese in skinny jeans and a top knot directing Stormzy in a big screen adaption of Super Mario Kart.

It’s very likely that I’m sitting outside the target demographic, but that doesn’t change the fact that Ready Player One is an objectively horrible, horrible movie. Go outside instead. Hug a tree. Stare at a white wall for two plus hours. Just stay away from this and be glad.