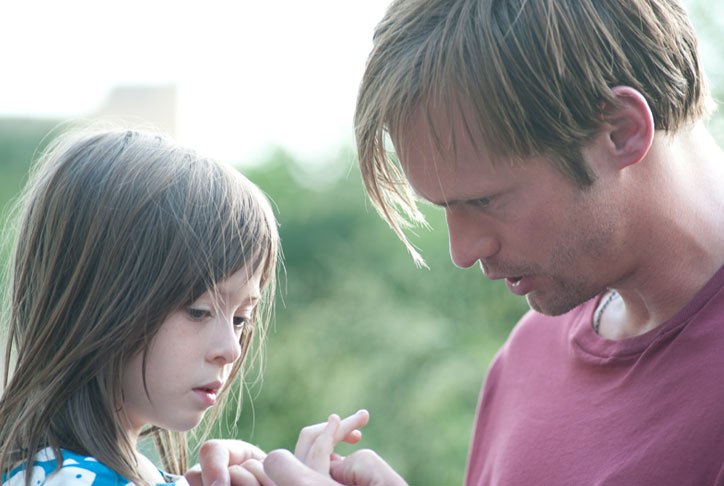 What Maisie Knew takes Henry James’ 1897 novel about a sensitive child with insensitive parents and moves it to a contemporary New York setting. Susanna (Julianne Moore) is a past her sell-by date rock star – imagine Courtney Love with slightly better hygiene – and Beale (Steve Coogan) is a moderately successful, but cash-poor art dealer. Susanna and Beale’s approach to nurturing their six-year-old daughter, Maisie (Onata Aprile), could best be described as business-class hillbilly. They are a textbook example of “How to Parent Badly,” and demonstrate a level of self-centredness that is simply staggering. Beale describes Maisie as his “sixth-favourite girl,” and suggests, without any hint of irony, to take her for a double espresso as a special treat.

The inevitable, messy split soon comes, after which Beale gets joint custody of both Maisie and the hot young nanny (Joanna Vanderham), while Susanna exploits bohemian bartender Lincoln (Alexander Skarsgård) to act as her fake husband, thus strengthening her status with the courts. Susanna and Beale make every mistake in the parent’s handbook, from fighting in front of Maisie, manipulating her emotions, and using her as a weapon in their very own War of the Roses.

An early scene showing Maisie nonchalantly playing noughts and crosses with her nanny while her parents verbally tear strips off each other in the adjoining room is the perfect analogy for her unfortunate position.

Given the positively Dickensian nature of her upbringing, Maisie remains implausibly sanguine throughout. No matter how many times she’s dumped off on strangers and left to fend for herself, she never acts up or ceases to love her bootless parents. Instead, she exudes a wide-eyed innocence and remains consistently sweet-natured. I can only assume that her post-puberty meltdown will be spectacular.

What Maisie Knew won’t change your life, but it is a perfectly modest, emotionally engaging film. At times it veers close to saccharine sweetness, but ultimately manages to maintain a bleak realism. The film is nicely shot – cinematographer Giles Nuttgens effectively utilizes shallow focus to evoke the six-year-old’s perspective – but by far the most impressive aspect of the movie is Aprile’s performance. Her portrayal of Maisie is one of the most natural and haunting you will see this year. It will stay with you long after the credits have rolled.