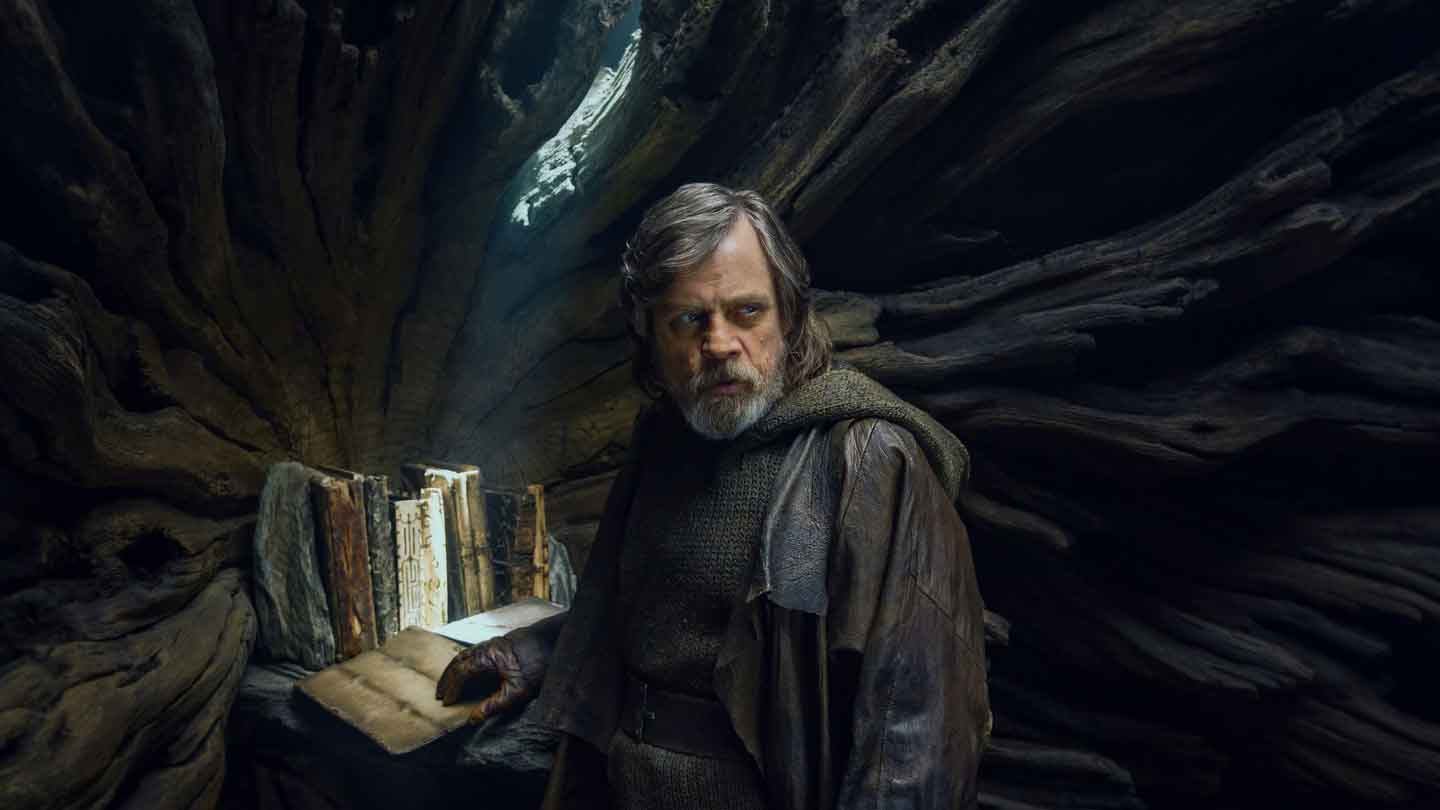 ``Defies all expectations, and not in a good way .``

Oh Star Wars you cruel mistress. First you built me up, then you knocked me down. And now you’ve done it all over again.

The Last Jedi picks up right where The Force Awakens left off. The First Order are down another Death Star (or whatever that big ice gun planet thing was) but certainly not out. General Hux (Domhnall Gleeson), Vyvyan from The Young Ones and a group of well-dressed Casualty extras are closing in on the remnants of General Organa’s (Carrie Fisher) Resistance. After getting his ass handed back to him, Kylo Ren (Adam Driver) has turned out to be something of a disappointment to to Emperor-by-proxy Snoke (Andy Serkis). Rey (Daisy Ridley) has finally tracked down the elusive Luke Skywalker (Mark Hamill) and returned his property. Luke doesn’t look too happy about it.

Although very brief, Hamill’s appearance at the climax of The Force Awakens was mighty powerful. Most importantly, it worked. The good news is that Luke is the emotional centre of The Last Jedi. With a surprising lack of sentimentality, Hamill carries a significant share of the action. Luke’s arc is well thought out and executed to perfection. The bad news is that it’s the only element of The Last Jedi that is.

The problem with Rian Johnson’s movie isn’t what happens exactly, but how it happens. Part of the Original Trilogy’s charm was that the fantastical elements were grounded in a gritty, lived-in aesthetic. Here, Johnson has confused fantastical with just plain dumb. Things get off to a fine start with some promising set-ups and clever stabs of humour. Then the feeling that something’s not quite right slowly starts to creep in. I’ve felt this disturbance in the force before; the year was 1999 and I’d just watched The Phantom Menace.

Quite early in proceedings a seminal event occurs. This seminal event is then undone in the dumbest conceivable manner. From this point on one dumb idea rolls into another, and The Last Jedi devolves into a sorry mess from which there is no return. Given Disney’s reputation for reshoots, strong-arm tactics and mid-production sackings, it is quite frankly amazing that some of these dim-witted concepts made it through development.

Introducing new characters into a world as familiar as Star Wars is difficult, but getting an audience care about them is nigh on impossible. J.J. Abrams seemed to manage this miraculous feat with ease. In cinematic terms, Rian Johnson has been handed the keys to a Rolls Royce. But as different narrative strands are fired off in all directions like party poppers and silly string, it becomes apparent that Johnson either doesn’t know what to do with the characters he’s inherited, or else he doesn’t care. As Rey’s path is tied so closely with Luke’s, Ridley suffers the least amount of collateral damage. But two movies in and Oscar Isaac’s goody-two-shoes pilot has yet to convince, and poor John Boyega might have been better off if his character had remained in a coma and sat this one out completely.

The Force Awakens is frequently maligned for being a lazy rehash of the first Star Wars, but it is a movie that succeeds on its own merit. It reproduced the feeling of being a child again and watching Star Wars for the very first time. The Last Jedi just reminded me of how old I was.

No doubt the pressure of making The Last Jedi completely different from The Empire Strikes Back was immense, so Johnson ended up taking bits from Empire and Return of the Jedi instead. Iconic segments from both movies are lifted wholesale and put back in a different order.  This produces a confusing emotional rhythm with huge narrative beats cropping up in all the wrong places. The Last Jedi has some serious pacing issues. Given that it’s the longest movie of the series, this is a problem.

The Last Jedi defies all expectations, and not in a good way. I don’t say this as a critic. I say this as a fan of nearly 40 years. George Lucas has cashed in his chips so he can’t be blamed for this mess, but a mess this most certainly is. Something as big as Star Wars doesn’t belong to a single filmmaker, and it’s not the property of a studio either. Star Wars belongs to everyone. Opinion of what it should be is going to differ from one person to another. This is just my opinion (and other opinions that resemble your own are also available). Some will watch The Last Jedi and ignore its myriad problems. Others will come away with the impression that it’s better than the original. I just wish I was one of them.

ROGUE ONE: A STAR WARS STORY