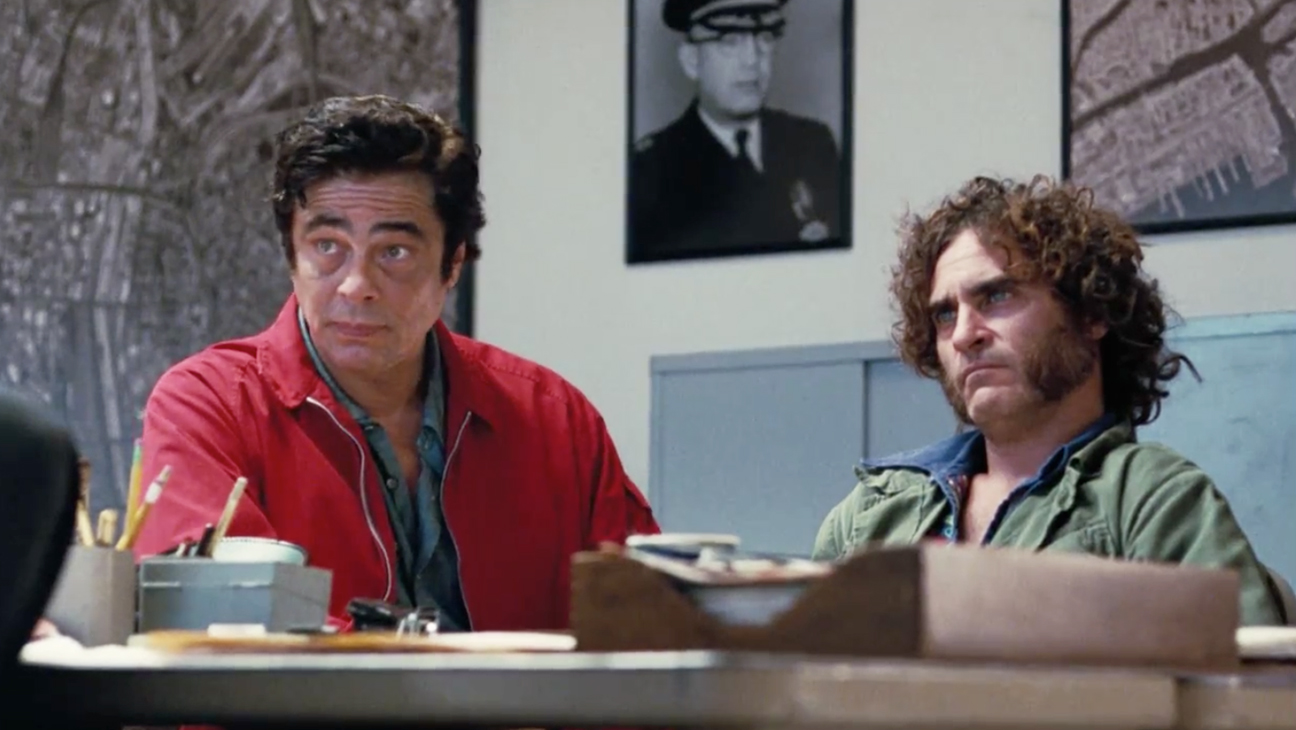 Way out west there was this feller I want to tell you about. Goes by the name of Larry Sportello. At least that was the handle his loving parents gave him, but he never had much use for it himself. See, this Sportello, he called himself “Doc.”

Let’s start with the staggeringly obvious. There is simply no getting around the comparison between Inherent Vice, Paul Thomas Anderson’s eagerly-anticipated stoner noir, and The Big Lebowski (1998), the Coen Brothers’ classic stoner noir. From the magical narrator (Joanna Newsom) attempting to explain the unexplainable, to the hallucinogenic dream sequences and narrative blind alleys, the similarities come thick and fast. Both movies share the same overall plot and hit the same beats along the journey, with almost interchangeable protagonists. The Dude and Doc are cut from the same sheet of acid. They’ve walked the same path and done the same drugs with the same results. In the hands of another director, Inherent Vice could have been an early history of the Dude – perhaps after he had authored the Port Huron Statement (“the original Port Huron Statement, not the compromised second draft”) but before Metallica’s Speed of Sound Tour (“…bunch of assholes”). The big difference between the two films becomes apparent in resolution. The Big Lebowski had one, while Inherent Vice just spreads itself around like the Ebola virus.

Anderson’s adaption of Thomas Pynchon’s novel is set in 1970s California, in the days after the Manson family finally nailed the coffin lid on the optimism of the 1960s. The plot ostensibly involves Doc (Joaquin Phoenix) trying to track down missing ex-girlfriend Shasta (Katherine Waterson), who has become romantically embroiled with a ruthless real estate mogul called Mickey Wolfman (Eric Roberts). But from there Anderson sets us on a path of endless MacGuffins, irrelevant subplots and narrative dead ends. The result is a movie more frustrating than trying to untangle a knot in a piece of wet string while wearing boxing gloves.

For example, Doc’s best frenemy is a reactionary, civil-rights-abusing LAPD detective in a flattop called Christian “Bigfoot” Bjornsen (Josh Brolin – everyone in this movie has at least two names).

Bigfoot has a proclivity for phallic-shaped foodstuffs and is undoubtedly closeted. What bearing this nugget has on the overall narrative I cannot say, but it’s just one of endless plot points that go absolutely nowhere. The detours come thick and fast; from Aryan bikers, paedophile dentists and fatal trampolining accidents to something called “The Golden Fang,” which might be a smuggling boat, a Chinese drug cartel, a secret society or all of the above.

In the context of Anderson’s attendant body of work, Inherent Vice is more than a little disappointing. Tonally, it careens around like a drunk on an icy road. One minute it’s a slapstick comedy, then a thriller by way of psychosexual drama, before flipping back to comedy again. It does a good enough job as a comedy and is often very funny, due in no small part to Phoenix’s pitch-perfect performance (his reaction to that baseball bat suckerpunch is priceless). His naïve, childlike hippy meets the terrors of the changing world around him with a mixture of confusion and abject terror. Doc is a brilliant comic creation and a joy to behold. Others don’t come out so well. Inherent Vice is pitched as an ensemble piece but most of the cast contribute brief, one scene cameos. Given some of the truly terrible performances, this in itself is not a bad thing. Had Owen Wilson ditched his languid somnambulist schtick, it would surely have paired back a good portion of the gargantuan 148 minute runtime.

I haven’t read Pynchon’s book so I can’t say how faithful Anderson’s adaption is, but I would speculate that the many problems are a result of sticking too rigidly to the source. I understand the urge to compare adapted movies with their sources, but either a film works on its own terms or it doesn’t. And Inherent Vice doesn’t. As viewers, we don’t have the luxury of flipping back and forth to reread sections. A second viewing might reveal hidden depths and illuminate some dark spots, but I wouldn’t be in a hurry to endure this again. It has been said that Pynchon’s work is unfilmable. With Inherent Vice, Anderson has proved that this is not the case. Whether he should have stayed as steadfastly faithful to the source is another matter entirely.