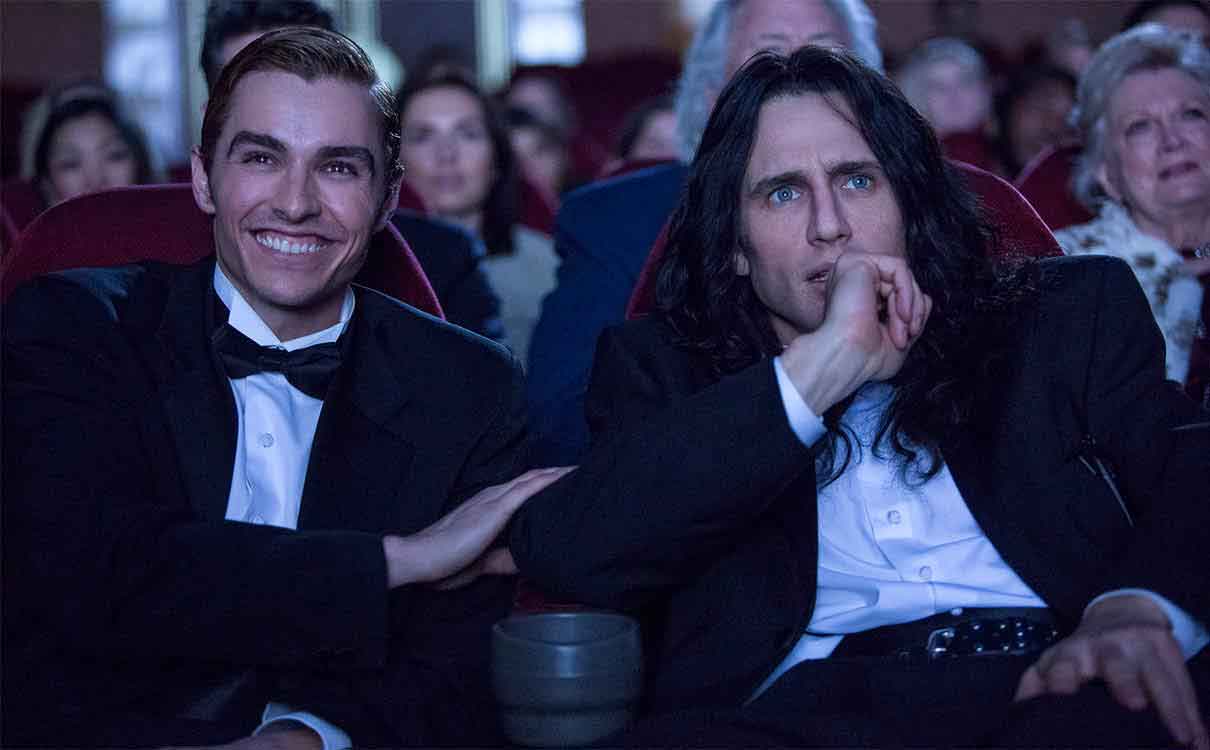 Confused? Then you’ve probably never seen The Room. Written, starring, produced and directed by the enigma that is Tommy Wiseau, The Room is widely regarded as being one of the worst movies ever made. The ultimate vanity project (Wiseau self-financed the movie to the tune of $6 million, the source of which remains a mystery) The Room is only a “movie” in the sense that a “director” has filmed “actors” saying and doing things for 99 minutes. It’s utterly nonsensical and quite hypnotic in its awfulness. Needless to say that The Room was an unmitigated disaster when it was released in 2003, but this wild hubristic folly has somehow achieved cult status in the years since, and The Room now regularly sells out fan screenings worldwide.

Director James Franco steps into Wiseau’s weird boots for this adaption of Greg Sestero’s The Disaster Artist: My Life Inside The Room, The Greatest Bad Movie Ever Made. It’s not necessary (or advisable) to watch The Room in order to enjoy The Disaster Artist, but it would probably be beneficial to have a look at 10 minutes of lowlights online. Anyone unfamiliar with Wiseau will probably be wondering what the hell Franco is playing at, but quite frankly, Franco nails it.

Wiseau is easily one of the oddest individuals to ever pull on a pair of cargo pants. Looking like the bastard love child of Gene Simmons and Muammar Gaddafi dressed up as Bad-era Michael Jackson, Wiseau sounds like an Eastern European immigrant who has learned to speak English from reading a fast food menu (“I can has cheesecakes? Hahaha. Too funny”). This heroic disregard for the laws of grammar and syntax demonstrates how unsuited Wiseau is to the role of screenwriter. It also explains why The Room contains some of the worst dialogue ever committed to film.

Movies about bad movies are often more fun than sitting through the bad movie itself (see Living in Oblivion, Ed Wood). In this regard The Disaster Artist is every bit as entertaining as you would expect. Once the cameras start rolling on The Room things really take off. Faced with Wiseau’s unshakable self-belief and complete lack of self-awareness on a daily basis, the frustration and confusion of cast and crew is a joy to behold. The effort that Franco has put into reproducing some of The Room’s most memorable scenes is just staggering. This forensic attention to detail in replicating complete and utter rubbish is a bit like the Royal Shakespeare Company staging a performance of Made in Chelsea. Or Pink Floyd reuniting to record an album of Cheeky Girls covers.

Where the movie falls short is when the camera turns its focus on the bizarre relationship between Wiseau and Sestero (played by Franco’s brother Dave). It is improbable that anyone would willingly tie their cart to Wiseau’s crazy horse, but why Sestero remains loyal to the certifiable filmmaker in spite of every fibre of his being screaming that this will not turn out well is something The Disaster Artist fails to answer. Unfortunately, this is the movie’s primary focus. In the fakest of fake beards,  Franco the Lesser is just not a strong enough actor to pull it off. The difference between Franco as Sestero the bad actor and Franco as Sestero the off-screen persona is imperceptible.

Simply pointing and laughing at Wiseau would be easy. To Franco’s credit he tempers the mockery with something approaching pathos and allows Wiseau a degree of sympathy that helps to wash away the sour taste of bullying.

The Disaster Artist is a worthwhile project. It is consistently funny and has enough sense to stop short of outright exploitation. The irony is that it will be soon forgotten while The Room will still be packing them in. It’s a weird world.

And stay for the credits.