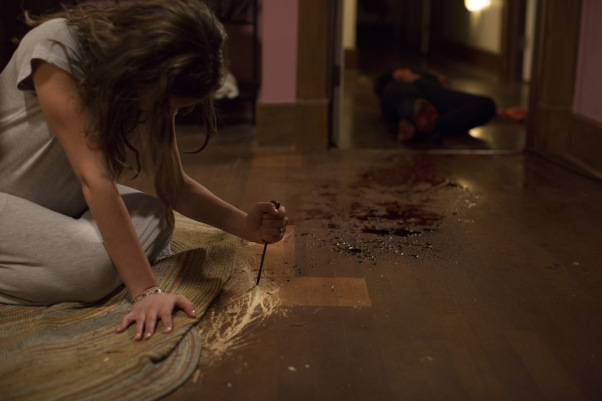 A monumentally stupid piece of work, devoid of any artistic merit or redeeming qualities whatsoever.

It would be all too easy to dismiss Devil’s Due as a monumentally stupid piece of work, devoid of any artistic merit or redeeming qualities whatsoever. So let’s just go with that. In short, directors (yes, plural) Matt Bettinelli-Olpin and Tyler Gillett have taken the story of Roman Polanski’s Rosemary’s Baby (1968), removed any semblance of tension, suspense, style or craft, and replaced them with clumsy plotting and a clunky found-footage device that is beyond cliché at this point.

Samantha (Allison Miller) and Zach (Zach Gifford – looking remarkably like the guy from Revenge who looks remarkably like James Spader) are a couple of middle class twits who possess the joint intellectual capacity of a common jellyfish. Samantha and Zack lead a privileged lifestyle in a palatial home that would shame a Russian oligarch. They also have a dog that demonstrates more common sense and cop-on than either human during the course of the film. Zach has some undefined high-powered job that allows him enough free time to assemble flat-pack furniture and work his way up from slip-ons to lace-ups. Samantha is in college studying something non-descript (because people who go to college are smart, right?). An over-inflated sense of entitlement compels Zach to compulsively record every vacuous utterance and bodily function that emanates from their gurgling blowholes. This gimmick is glossed over with the flimsy excuse of starting a “family history” (nicely shoehorned, found-footage device).

On the last night of their honeymoon in the Dominican Republic, the newlyweds lose their way back to their hotel (to be fair, this pair of mouth-breathing simpletons would probably get lost on the way to their en-suite). They accept the offer of directions from a complete stranger and willingly follow him off to the dodgiest slum in Santo Domingo, whereupon Samantha is drugged and impregnated by a satanic cult, or something.

When they awake in their hotel the next morning with no memory of what happened or how they got there, Simple Zack and Simple Sam write the whole thing off as too much drink. They decide not to bother checking the video camera that’s been recording everything that’s happened to these two imbeciles since the start of the movie.

On returning to Casa de Simpleton, they are overjoyed to discover that Sam is with child. When her behaviour becomes increasingly erratic – for example, scarfing fistfuls of raw mince straight from the freezer section of the local supermarket, or hunting, killing and devouring a pack of wild deer – Simple Zach chalks this down to hormones (women, eh?). If her index finger had started speaking Bible verse in a demonic voice, this moron would probably have shrugged and said, “Whoa… awesome, dude.”

Devil’s Due is a dumb, dumb movie that doesn’t work on any level. It has the aesthetic and appeal of a bad student film. The found-footage gimmick necessitates a constant “Oh, you’re miscarrying? Hold on, let me just grab the camera,” that turns out to be unintentionally hilarious. The gore isn’t that gory, and the bizarre choice of using an annoying “interference glitch” means that the film’s few genuine shocks are well-signposted. During the film’s climax, I was more upset by the destruction of the delightful Laura Ashley-style furnishings and fittings than by whatever grisly punishment was being meted out either of our two idiotic protagonists. It is unlikely to sate even the most undiscerning horror fan. Nevertheless, it will probably sell enough tickets at the box office on a miniscule budget to justify a sequel. And that is truly scary.

THE THEORY OF EVERYTHING