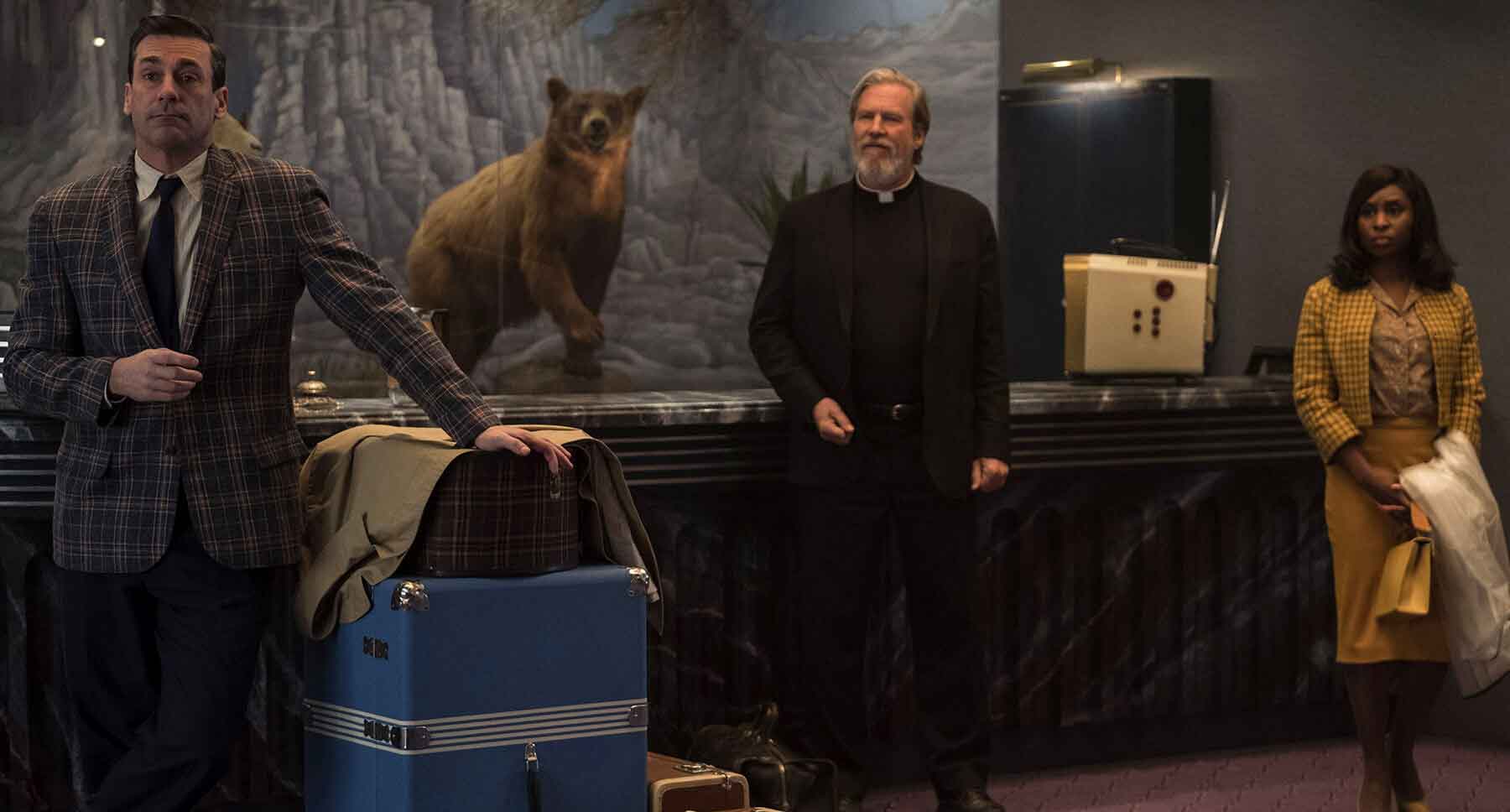 ``Bad Times is no classic, but it's still a blast``

The “hotel-based neo-noir”. It’s a sorely underrepresented genre. Oh sure, capes and tights are where the money’s at, but kudos to Bad Times at the El Royale for going hard after that sweet, sweet niche dollar. With a soupçon of voyeurism and taxidermy from Psycho and a dollop of blood and guts from Vacancy, Bad Times is a solid B movie thriller that knows its audience. No matter how small that audience may be.

Bad Times at the El Royale is the second directorial effort of screenwriter Drew Goddard (Cloverfield, The Martian). It’s reminiscent of one of those high concept, low-brow throwback thrillers that were semi-popular back in the 1990s. Calling it “Tarantino-esque” would be reductive; Tarantino was never this good, even when he was good. Bad Times is a confident piece with an unmistakeably theatrical style. Using a miniscule cast, the set-bound action unfolds in a series of acts over the course of a single night.

A 1950s-set prologue shows Nick Offerman hiding a bagful of stolen cash beneath the floorboards of a hotel room, before getting offed (Offed-erman?) by a faceless gunman. Cut to a decade later and the titular bad times kick off at the El Royale with the arrival of a roll call of Cluedo characters. These include a down-at-heel lounge singer (Cynthia Erivo), a priest with Alzheimer’s (Jeff Bridges) a vacuum cleaner salesman, (Jon Hamm), and a violent counter culture drop-out (Dakota Johnson).

The rundown hotel is located right on the California/Nevada border, with a bright red line running straight down the middle. To be honest, there’s no good reason for this gimmick beyond providing a very literal metaphor of characters crossing a line. What’s going on with these people and why have they come to the El Royale? Needless to say, none are who they appear to be. Each has been drawn there for different reasons, and their back stories are fascinating.

With a cast list that you can count on one hand, there’s plenty of opportunity for grandstanding. The stand-out is undoubtedly Erivo. She gives a charismatic performance that’s as powerful as her voice. With an oddly supernatural level of awareness and perception, she navigates through the plot with an agency that puts her at a distinct advantage. Erivo is a revelation.

Bridges is dependable as ever, though Fr. Flynn is the kind of pleasantly grizzled part that he can pull off in his sleep. Johnson continues to put distance between her and the execrable Fifty Shades franchise. Calm, primal and dangerous, she is a compelling presence. Hamm seems to be channelling an approximation of Foghorn “I say, I say” Leghorn. As one of the more verbose guests, this is unfortunate. His performance comes off as very am-dram, so it’s just as well that it turns out to be an act.

At the other end of the scale, Chris Hemsworth is something of a disappointment. As a Charles Manson-type cult leader, his imminent arrival is built up with a sense of dread and menace. When he does appear late in the final act though, there is little evidence of either. Hemsworth just doesn’t have the gravitas to pull off the part. Some fat could have been cut in the editing room to make for a leaner final product, and as the body count rises the wrap-up is admittedly a little on the wobbly side.

Guided by Goddard’s confident hand, Bad Times has an intriguing hyper-stylish aesthetic. Some bold choices and creative shot compositions help to lift it above the ordinary. One particular extended tracking shot – presented as a long take – cuts out a ton of unnecessary exposition with rare flair and panache. It’s a joy to behold. Finally, the soundtrack is impeccable. Music supervisor Michael Giacchino has put together a mixtape of 1960s wall-of-sound goodness that pushes the movie into a different league.

Bad Times is no classic, but it’s still a blast.