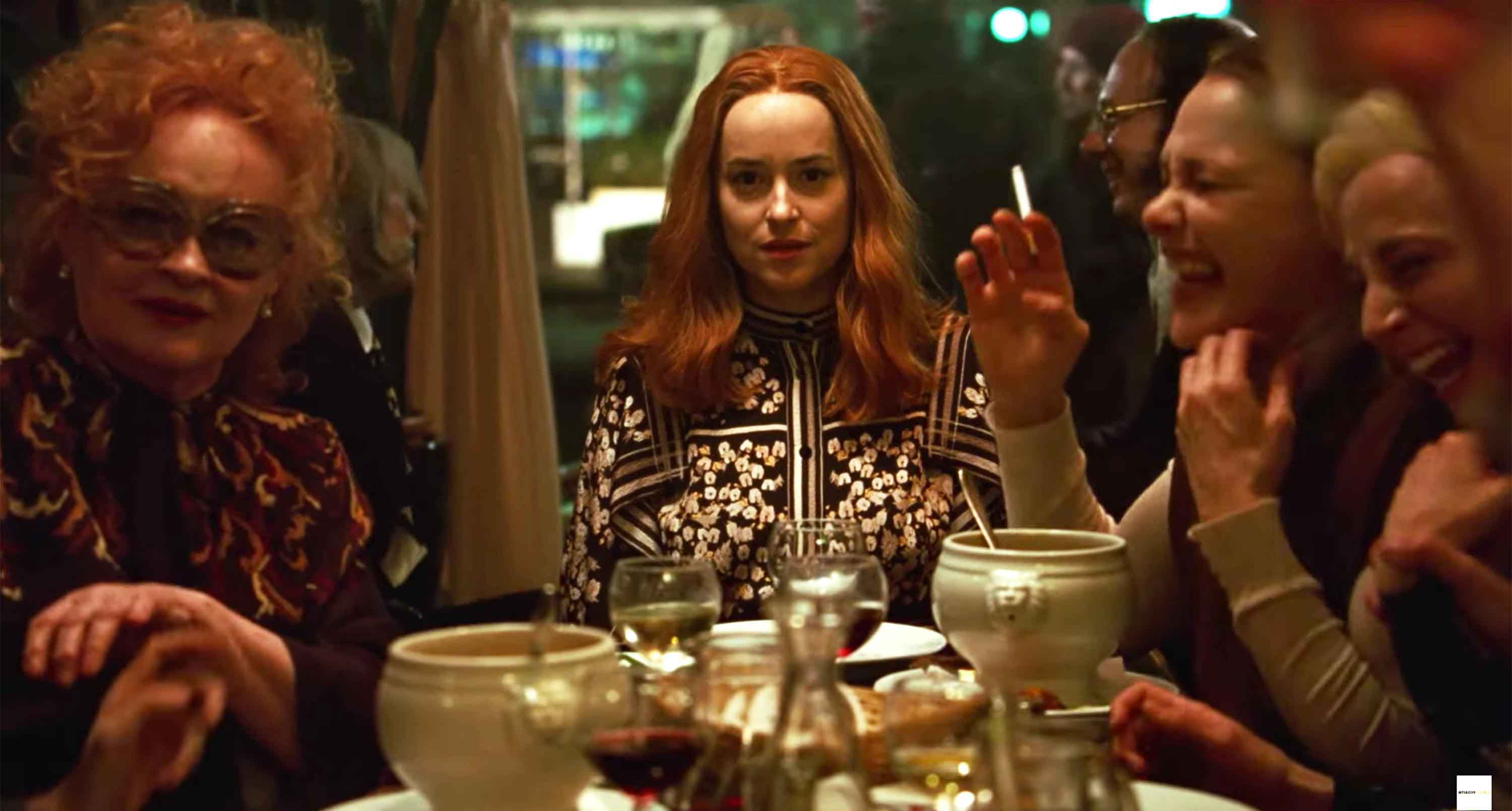 ``fascinating and disturbing in equal measure``

Luca Guadagnino wouldn’t be the obvious choice to direct this remake of Dario Argento’s 1977 giallo horror classic. Up to now, the Italian director’s stock in trade has been movies preoccupied with the problems of very rich people (Call Me by Your Name, A Bigger Splash). But Guadagnino leans hard into his first horror and doesn’t shy away from the more gruesome elements.

Set during the German Autumn of 1977, Patricia (Chloë Grace Moretz) arrives at the home of psychiatrist Dr. Klemperer (Tilda Swinton) in a state of acute distress with stories of witchcraft at the prestigious Markos Dance Academy. Just as Patricia disappears under mysterious circumstances, Susie (Dakota Johnson) arrives at the academy from the other side of the globe. Under the tutelage of renowned choreographer Madame Blanc (Swinton again), Susie takes Patricia’s place as lead dancer of the troupe. As the various members of the coven engage in a power struggle for loyalty and control, it becomes apparent that Susie’s purpose goes far beyond learning to dance.

The overall look and feel of Suspiria is highbrow horror. Obviously certain elements are lifted from Argento’s film, but Guadagnino’s version is enough of its own thing to justify this remake. The gloriously lurid colour palette is gone, replaced here with the muted greys and browns of 1970s Cold War Berlin. Of course, this makes the bloodbath all the more shocking when the red tap is turned on (and it most certainly is turned on). In place of Goblin’s crazy prog rock is a haunting score from Radiohead’s Thom Yorke tinged with hints of krautrock, mirroring the period setting.

At least the dancing serves a purpose in Guadagnino’s version. In a particularly disturbing sequence, Susie performs a kinetic dance piece called “Volk”. As she throws herself violently around the dance studio, her physical actions have terrifying consequences on a young dancer in another studio, and the poor girl is left a knotted mess of body horror flesh, cartilage and protruding bones. Although not entirely original, it’s a genuinely shocking sequence that illustrates the powerful hold of the coven.

Swinton is triple jobbing here in three separate roles, two of which are under heavy prosthetics. Maybe the intention was to make Suspiria an all-female affair (and perhaps atone for the shoddy treatment of every female character in Call Me by Your Name) Or maybe Guadagnino was simply having a laugh with his muse. Whatever the purpose was, the effect is unsettling. Swinton makes for a convincing old man, even if it is patently obvious that it is her underneath.

Screenwriter David Kajganich overloads the cart with too many subplots (national guilt, missing spouses), and the wheels finally come off in the final act. A fair comparison would be Darren Aronofsky’s waking nightmare, Mother!, in that things appear to be proceeding along a predictable path before taking a detour down the road marked “bonkers” and keeps going. The supernatural becomes a little too literal in the finale, but at least it’s never dull. Fascinating and disturbing in equal measure, Suspiria isn’t for everyone but fans of the genre should be more than satisfied.