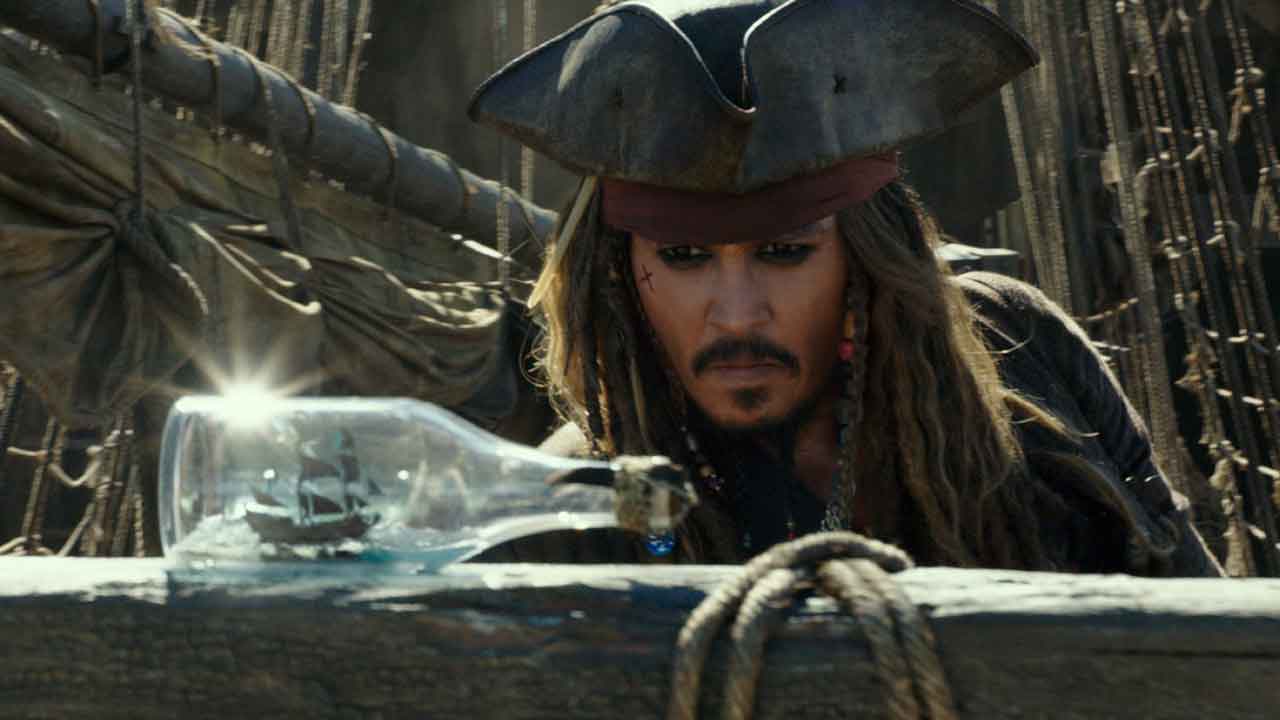 Johnny Depp has spent most of this century engaged in a diabolical campaign designed to destroy every last shred of his reputation. Once a compelling presence in a dull 1990s landscape, the gutsy Depp that appeared in Cry-Baby, Edward Scissorhands, Dead Man and Ed Wood is now a dim and distant memory. Every time it looks like he’s hit rock bottom, he shows up in another Kevin Smith movie. Disney’s Pirates of the Caribbean franchise is like a microcosm of Depp’s slow career suicide. Jack Sparrow might have started off as a tongue-in-cheek take off of Keith Richards, but the character has devolved into a parody hidden inside a pastiche covered in another parody – Russian doll-style.

It’s staggering that Depp has managed to milk five movies out of this one-note dainty drunk tightrope walking act. It’s more surprising that the Pirates movies have made over $3.7 billion at the box office to date. But Depp spends that much on wine every month, and that island in the Bahamas won’t pay for itself. So if there’s still money to be made from this old rope then Depp is more than happy to sell his old rope.

In Pirates of the Caribbean: Salazar’s Revenge, Sparrow teams up with Henry Turner (Brenton Thwaites – chinless and forgettable), son of Orlando Bloom’s character from Pirates 1 to 3. Henry is searching for a MacGuffin called the Trident of Poseidon, which will break the curse holding his father on board The Flying Dutchman at the bottom of the sea. Along with Sparrow, Henry is joined by astronomer Carina Smyth (the wonderful Kaya Scodelario), who is in possession of a star map that leads to the aforementioned MacGuffin. Meanwhile, the undead Captain Salazar (Javier Bardem) has escaped from the Devil’s Triangle where he was trapped by a young Sparrow, and is out for revenge.

Unless you’re outside Ireland or the UK.

In which case it’s titled Pirates of the Caribbean: Dead Men Tell No Tales.

The good news is that über-producer Jerry Bruckeimer has manged to keep Depp’s off-set drama off set. If the relatively inexperienced directing team of Joachim Rønning and Espen Sandberg (Netflix’s Marco Polo) were intimidated by tackling a project of this scale, then it doesn’t show. The pair do a fine job of corralling the sprawling action, including an impressive sequence where an entire building is pulled through a town via horsepower, and an ingenious scene with Sparrow in a loop-the-looping guillotine that is reminiscent of Gore Verbinski at his creative best.

Pirates 5 boasts a production budget that would make Donald Trump’s sphincter tighten like a clown making balloon animals at a kid’s party, so it’s heartening to note that some of it has been spent in the areas that really matter. The art direction, costumes and production design are all spectacular. Alongside the superlative Scodelario, it’s these practical elements – not Depp – that should be hogging all the publicity.

In the main, the CG effects are used to good effect without becoming distracting. The underwater technique used to render the undead Salazar and his crew is particularly striking. Elsewhere, the current trend of de-aging actors rears its ugly head and throws up one of the movie’s few missteps. A prolonged flashback sequence dealing with the young Jack Sparrow looks like an unfinished workprint, with Depp’s digitally altered head floating around the screen like a satsuma stuck on a cocktail stick.

Perhaps it’s down to lowered expectations (Pirates 2 was the last movie I walked out on, and I haven’t been compelled to return since), but Pirates 5 is a perfectly serviceable summer blockbuster. It’s inoffensive, amiable and surprisingly enjoyable. The action is impressive and zips along at a fair pace. It would have been greatly improved with a little more Scodelario and a lot less Depp. This little Sparrow is now looking very sad and pathetic. Disney should consider putting him down once and for all.