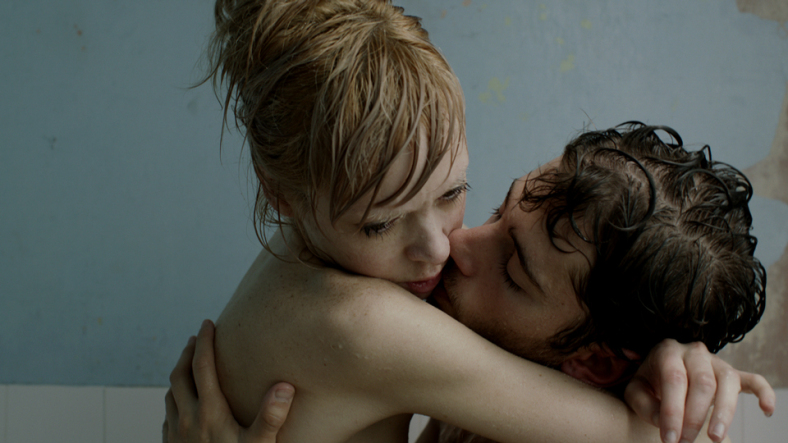 If Jarvis Cocker detoured into directing pornography, this is what it would look like.

Excuse me Sir, can you spare a moment to talk about auto-erotic asphyxiation? We live in a funny old world, filled with folk who will leave no fetish unexplored in an effort to satisfy their bizarre erotic predilections. Take poor David “Grasshopper” Carradine for example. One can’t help but imagine that the last thought that went through his head, before his naked, strung-up body was discovered in a Bangkok hotel wardrobe by a luckless chambermaid, was “oh bugger.” For 99.9% of us, a proposal of being choked during intercourse would probably induce the stock response of “thanks, but I better not – I’ll miss my bus.” Victor (Julian Morris) however, belongs with the 0.1% who think “why, that sounds just grand.”

Victor is a Scouse dock worker with vague dreams of escaping his dead-end urban job and someday working with nature. He is a sensitive soul at odds with his surroundings and his oafish peers. A dysfunctional childhood and a vague, unnamed trauma has left Kelly (Antonia Campbell-Hughes) emotionally damaged. Her only friend, Victoria (Claire Keelan) is a dominatrix who persuades Kelly to assist in a little extra-curricular S&M. But where Victoria’s motivation is purely financial, Kelly’s is a compulsion. When she meets Victor, she finds a willing outlet for venting her violent sexual needs. Their co-dependence becomes genuine love and affection. And then she goes and spoils it all by doing something stupid like carving their initials into his back with a piece of broken glass. One for the kids then, obviously.

Set in Liverpool, with a Welsh director, a Northern Irish female lead, with co-funding from the Irish Film Board and the Film Agency for Wales, Kelly + Victor is a heterogeneous creature. Morris is utterly compelling throughout, giving a credibly restrained performance. Until her undeniably powerful final scene, the role of Kelly gives Campbell-Hughes very little scope, and is hindered further by the impediment of a wavering Liverpudlian accent. The tacked-on drug-dealing subplot serves no function, other to ensure all boxes marked “edgy drama” have been ticked.

Given the subject matter, director Kieran Evans is to be commended for ensuring that the profusion of graphic sex scenes are lurid, but never exploitative. The aesthetic is grimy bedsit realism; if Jarvis Cocker detoured into directing pornography, this is what it would look like. The contrast between the rural Victor and the urban Kelly allows for some striking visual imagery. Special mention must go to sound designer Steve Fanagan, whose innovative manipulation of sound elevates many sequences above the mundane. During an early club scene where the two lovers meet for the first time, Fanagan replaces the diegetic thumping dance soundtrack with a haunting piece of chamber music, and dulls the sound during the numerous asphyxiation scenes to great effect. These small touches, along with strong performances from the two leads, help to raise Kelly + Victor over the banal.