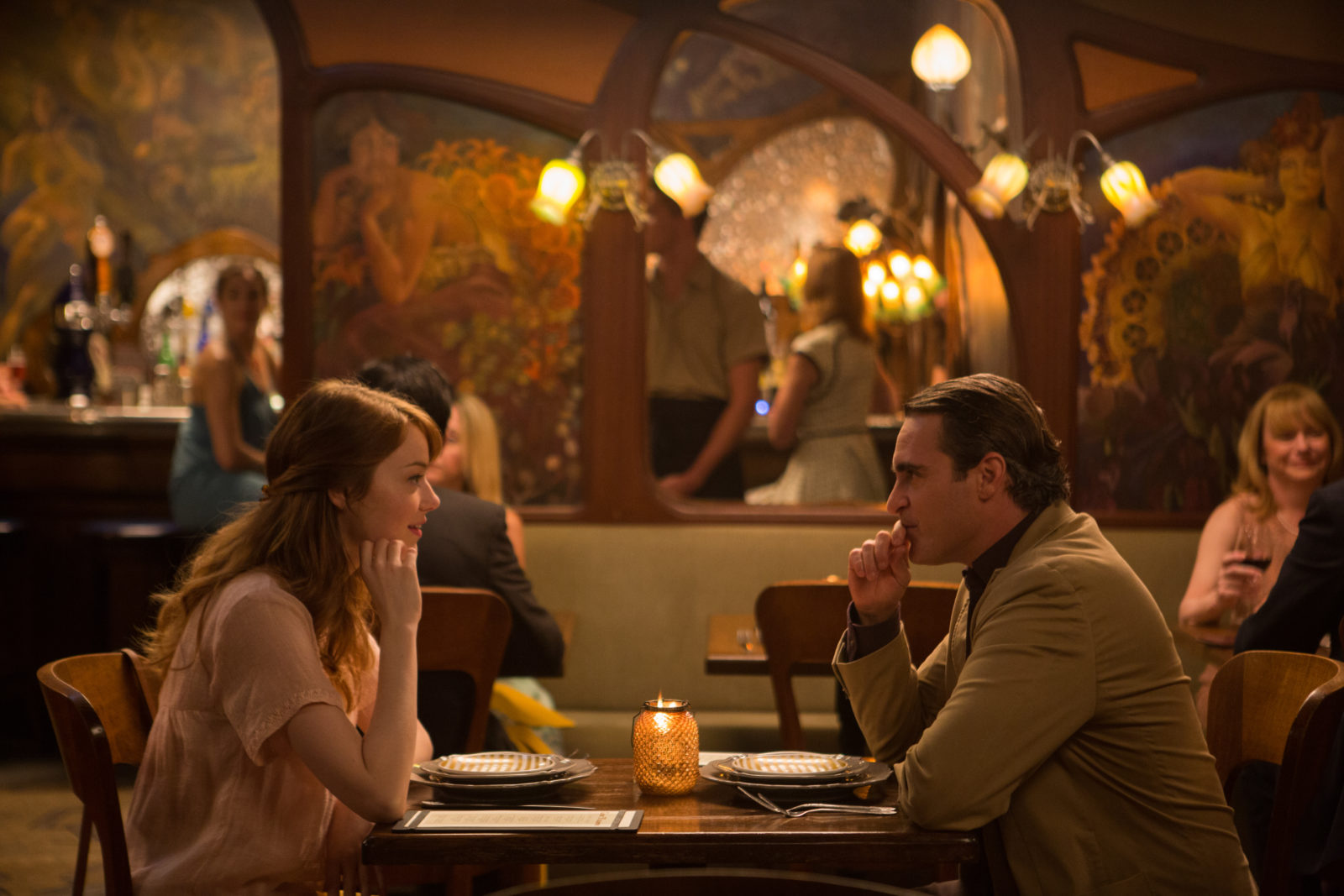 Late period Allen is very much like a box of Roses on Stephen’s Day. The purple ones are long gone, and only the coffee cremes are left.

Another year, another Woody Allen movie. It must be said that late period Allen is very much like a box of Roses on Stephen’s Day. The purple ones are long gone, and only the coffee cremes are left. Often the only way of distinguishing one from the next is from the calibre of actors at the filmmaker’s disposal. Allen is still capable of occasionally delivering something remarkable, but with a work ethic like his it’s perhaps understandable that the dross outweighs the cream. Irrational Man, his 46th feature in as many years, is Allen on autopilot.

This one-sided riff on Hitchcock’s Strangers on a Train (1951) is yet another underwhelming annual placeholder. Professor of philosophy Abe Lucas (Joaquin Phoenix) arrives at his new position at a New England college preceded by a reputation of troublesome brilliance. Blocked, impotent and often drunk, Abe has lost all passion for his work. He believes that nothing he says or does will make any meaningful difference to the world. This tormented genius act makes Abe a target for both the bright young Jill (Emma Stone) and fellow professor Rita (Parker Posey). Jill pursues Abe for some extracurricular tuition but only the lecherous Rita gets to sample a disappointing slice of philosophical man-pie.

Abe’s situation changes when he eavesdrops on a random conversation with a mother lamenting a morally-corrupt judge presiding over her custody hearing. He decides to commit a random act of kindness by killing the judge and thereby restoring some good to the universe. Once the deed is done, Abe’s funk is lifted and he takes up an affair with Jill, but she becomes increasingly suspicious over his role in the murder.

It would be inaccurate to describe Irrational Man as a black comedy, as it is never funny. It is a deeply pretentious movie that somehow also manages to ridicule the pomposity of academia. The stilted and self-conscious script is littered with references to Kant, Kierkegaard (all the “Ks” really) and Sartre. Allen’s latter movies often give the impression that his actors are simply reeling off reams of exposition rather than committing to a natural, convincing performance. However, Stone and Phoenix are proficient enough to carry it off. But just about. It is beautifully shot by renowned cinematographer Darius Khondji, but Irrational Man is far too safe and inconsequential to cause any ripples of interest. It is unlikely to win over any new audience, but I doubt that will concern the director unduly. At this stage, Allen is more than comfortable to accept his shortcomings and would be the first to admit that quantity doesn’t mean quality. There’ll be another one along soon enough.