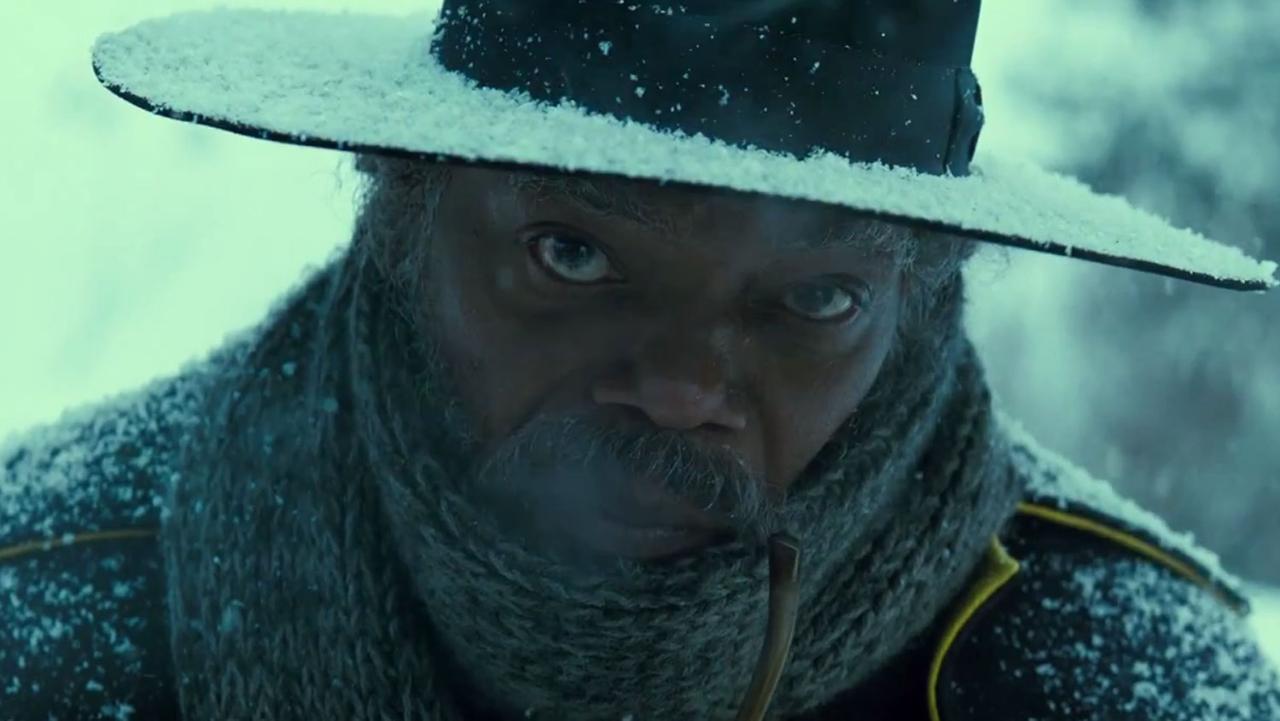 Tarantino needs a producer that isn’t petrified of upsetting him.

Eight is the magic number. Quentin Tarantino’s eighth slice of Grand Guignol, is released on the eighth day of the New Year and brings us eight equally detestable protagonists. It’s difficult to say how The Hateful Eight ranks among the director’s body of work, because he’s been remaking the same bloody revenge plot since the start of his career.

Set in post-Civil War Wyoming, bounty hunter John “The Hangman” Ruth (Kurt Russell) is transporting convict Daisy Domergue (Jennifer Jason Leigh) to the town of Red Rock for execution. En route he meets former Union major Marquis Warren (Samuel L. Jackson) and Chris Mannix, a Confederate militiaman and the incumbent sheriff of Red Rock. After a spirited bout of political debate, the party are forced to shelter from a fierce blizzard at Minnie’s Haberdashery, a wagon stopover. Four shifty-looking strangers are waiting for Ruth at Minnie’s, and he starts to suspect that one or more of them are in cahoots with Domergue.

Robert Richardson’s cinematography in the first act is breath taking. The beautifully bleak winter landscape completely justifies the choice of shooting in the expansive 70mm format. Combined with a wonderfully histrionic Ennio Morricone score, and the first half of The Hateful Eight is a pleasure. But there is a marked shift in tone from the halfway point (flagged by an oh-so-retro intermission). Once the party arrives at Minnie’s, the movie turns into a setbound chamber piece. This theatrical “whosgonnadoit” format allows the director ample opportunity to work in many of his overused tropes and plot devices, such as revisiting events from different perspectives, wordy monologues, and a finale that looks like a butcher’s window. It also exposes his many shortcomings.

Tarantino is a decent director and a fine storyteller, but he is incapable of maturing or evolving.

Very early in his career, he hit upon a knowing, pop culture style with widespread appeal. Unfortunately, he still finds the same things “cool” as he did in the beginning. Tarantino checks himself from sticking in a bit of Stealers Wheel, but some of the musical cues are still painfully distracting. The Hateful Eight’s third act plays out in the same manner as Reservoir Dogs. In a riff on Dennis Hopper’s “Sicilian” speech from True Romance, Jackson is made to deliver a truly bizarre bit of homoerotic miscegenation that serves no purpose other than shock value. And shoehorning in two minutes’ worth of voiceover narration to explain a key plot point in an otherwise voiceover-free movie just implies laziness.

And then there’s that word that Tarantino loves so much. The script is peppered with fewer N-bombs in comparison with Django Unchained, but it’s still rife, and once is too much. Regardless of which character is speaking the dialogue, it just sounds wrong coming from Tarantino’s pen, like a virgin trying to convince you how much action he’s getting. Tarantino seems to be incapable of writing a black character that isn’t constantly defined by their blackness, and it’s unpleasant to witness yet again.

With a running time of almost three hours (and a “roadshow” version weighing in at an arse-numbing 187 minutes), The Hateful Eight is needlessly self-indulgent. A good 30 minutes could easily have been left in the edit suite without losing anything. Tarantino needs a producer that isn’t petrified of upsetting him, but he is unlikely to find one at this late stage in his career. Besides, he is far too assured of his own brilliance to ever listen to reason. And there’s the rub.

The Hateful Eight will appeal to Tarantino acolytes, but it’s unlikely to convert any sceptics.