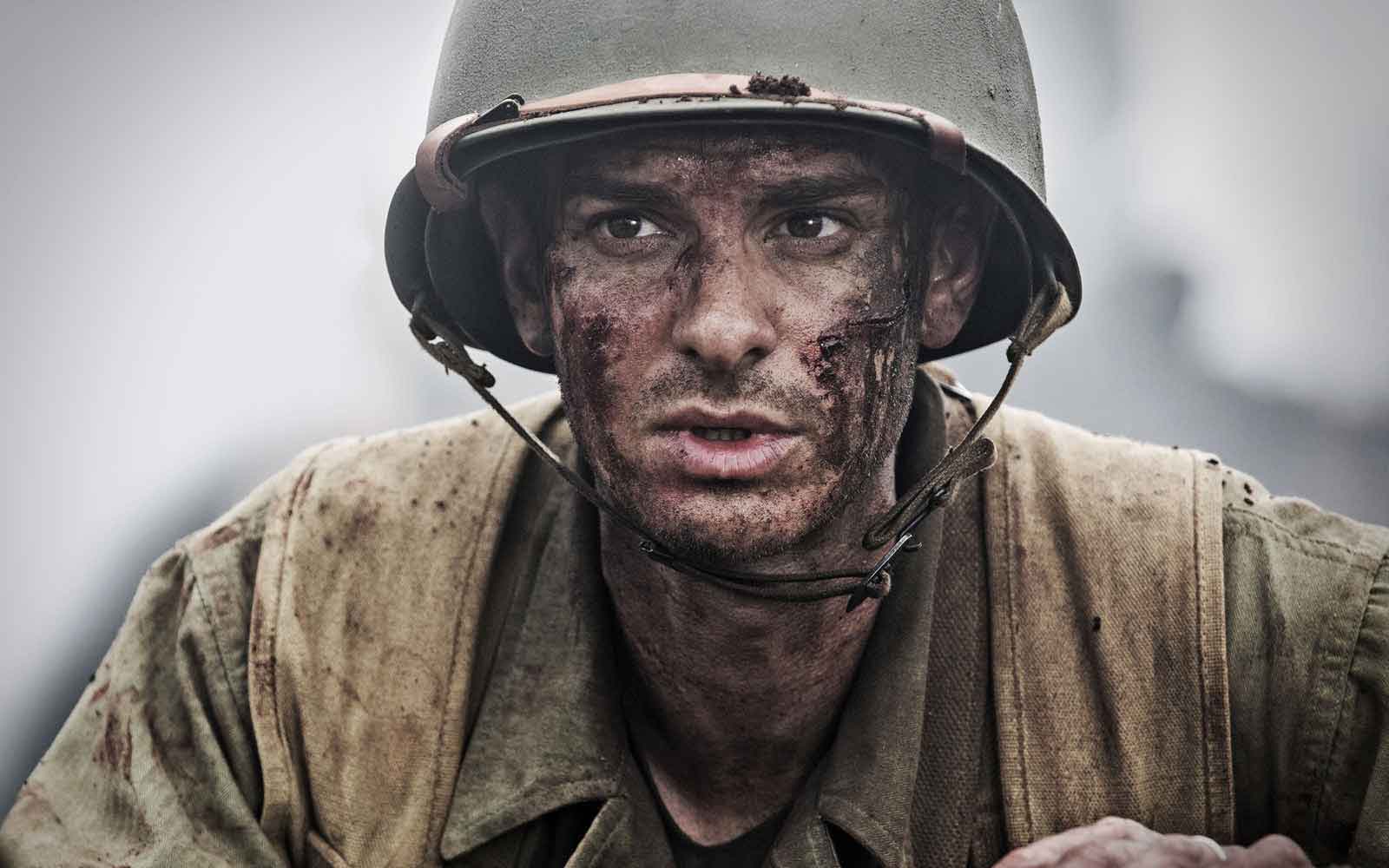 ``If Gibson deserves any credit here it's for managing to turn an incredible story into a preposterous one.``

From Jesus Christ to William Wallace, right up to the sock puppet in The Beaver, Mel Gibson loves a story about sacrifice. Top it off with gargantuan levels of suffering and Mel’s your only man.

Just don’t ask him about the Jews.

Hacksaw Ridge is Gibson’s return to prestige movie-making after a prolonged, self-inflicted period in the wilderness (see above). It is essentially a film about the right not to bear arms. How this anti-Second Amendment message fits with the ultraconservative filmmaker’s worldview is hard to say. Perhaps if we look at it as a story about a guy going into battle armed only with his beliefs, his bible and an unswerving faith in The Lord God Almighty, then the appeal for God-fearin’ Gibson is easier to understand.

This is the true story of Desmond Doss (Andrew Garfield), a conscientious objector during World War II. Citing religious beliefs, Doss refused to carry a weapon or take a life, but fought alongside his fellow soldiers in a brutal assault on the Maeda Escarpment in Okinawa. His battalion is ordered to retreat in the aftermath of a fierce Japanese counterattack, but Doss stays behind in the kill zone. Over a number of days, Doss saved the lives of an estimated 75 men without firing a single bullet.

Hacksaw Ridge is a film of two halves. The first half looks at Doss’ formative years, but Gibson has little interest in character-building. This early section is defined by a melodramatic hyper-sentimentality while the director kills time before getting to the gore. Garfield deserves credit for not going full Forrest Gump, and in fairness, he is more impressive here than he’s been in a very long time.

Gibson draws characters with a thick black marker and there is nothing subtle here. After enlisting, Doss ends up in a company of barely sketched-out stereotypes with nicknames where proper fleshed-out identities should be.

The one with the moustache is easy to spot later on because he’s already spent much of the movie walking around in the buff (I’m not making this up) but beyond that I couldn’t pick the rest out of a line up. So when they start getting riddled with bullets and blown limb from limb, it’s very hard to care. Band of Brothers this is not.

Part one closes with a court martial trial that veers into pantomime territory with Hugo Weaving in the role of panto dame. But once Doss heads off to war, Hacksaw Ridge turns into an orchestra of offal. The second half is a symphony of blood, mud and body parts, where no 1950s war movie cliché is left behind (“Don’t mind me Sarge… It’s just a flesh wound”), and when all else fails, Gibson breaks out the slo-mo and swelling strings.

The crowd-heavy battle scenes can appear sporadically impressive (Gibson certainly knows how to deal with extras by the hundred), but if Gibson deserves any credit here it’s for managing to turn an incredible story into a preposterous one.

Everything about Hacksaw Ridge is broad and blunt. One scene that sticks in the memory involves a soldier grabbing the top half of a corpse and using it as a human shield while he runs screaming at the Japanese line with machine gun blazing. It’s a scenario that would have been rightly rejected from Rambo 2 on the grounds of being a bit much, but one after another these ridiculous creative choices destroy any and all credibility. Hacksaw Ridge isn’t so much a war movie as a satire of a war movie. Like Tropic Thunder without the jokes.

For his part in the battle of Okinawa, Doss was awarded the Medal of Honor in 1945. After the War, he led a quiet, humble life and refused many offers to adapt his story for the big screen up to his death in 2006. I somehow doubt that Hacksaw Ridge was what he would have wanted.