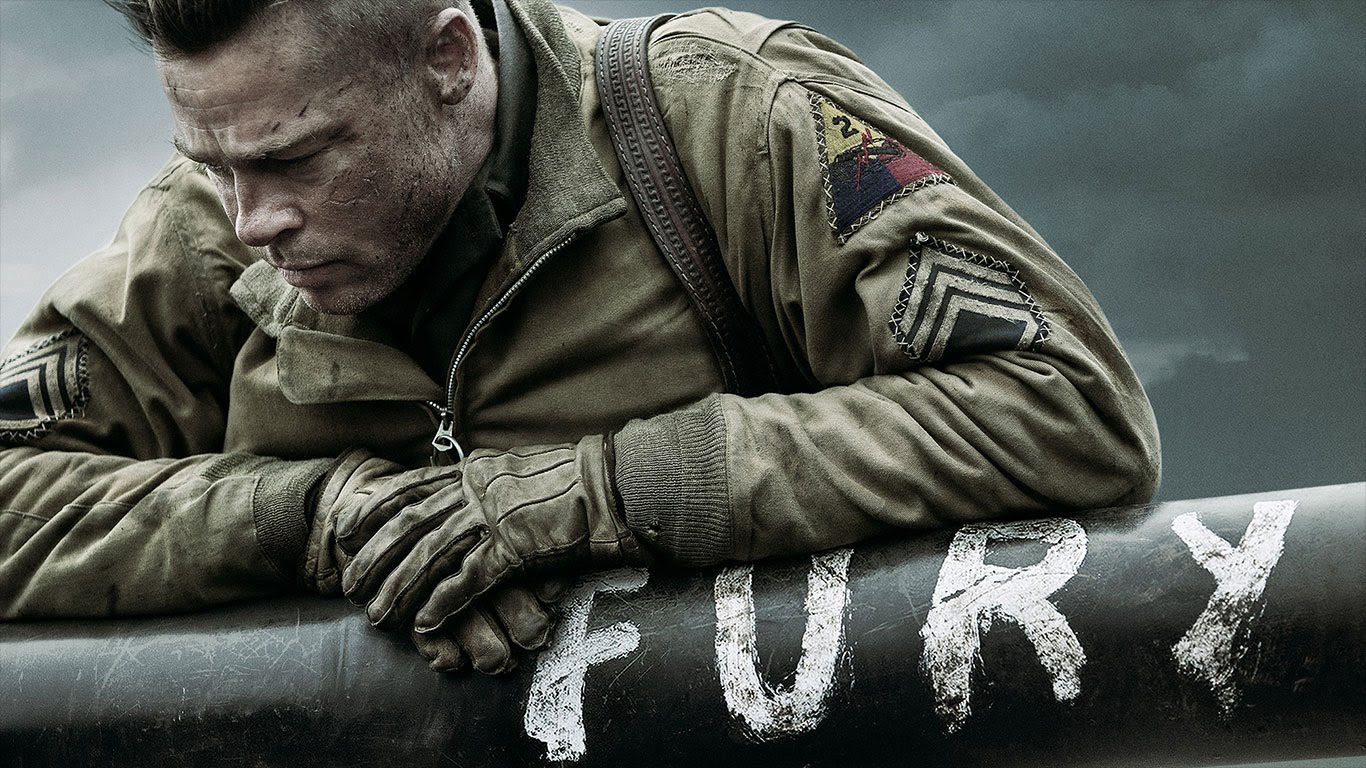 World War II (the massively successful sequel to World War I) was very bad for everyone involved, but it’s proven to be a veritable goldmine for Hollywood. What makes this period such an appealing source of material is undoubtedly the unquestionable clarity of good triumphing over evil. Fury muddies the whole good/bad binary somewhat in showing the atrocities committed by the good guys. Without resorting to the usual jingoistic flag-waving, it renders a cast of morally ambiguous characters in shades of grey.

Set in the final days of the War, Sgt. Collier’s (Brad Pitt – back in the Nazi killin’ business) Sherman tank crew have just lost their second gunner in a German attack. Collier and his men have already seen action on the African, French and Belgian fronts, and now find themselves facing a desperate enemy on their home turf. Three years of living off adrenaline in the claustrophobic confines of a stinking steel tank has taken a heavy toll. Nerves are frayed, tempers flare and there is little evidence of camaraderie between Collier and his men. These are not nice people doing not nice things.

Enter Pvt. Ellison (Logan Lerman), a greenhorn typing pool clerk drafted in to make up the numbers. His first task is cleaning bits of his predecessor’s head from the seat he is soon to occupy. Ellison is the film’s moral conscience. His personal code of ethics means that he takes to dispatching Nazis with all the gusto of a man whose natural aptitude is typing 60 words a minute.

This reluctance to kill (along with not having the right hair) antagonises his comrades and soon causes allied casualties.

War, as they say, is hell. And writer/director David Ayer pulls no punches when it comes to showing the cold, muddy, grim reality of battle. The act of killing, so often depicted with the polished detachment of a drone strike, is rendered here with a clumsy desperation that feels chillingly authentic. Fury is hyper-violent. The gore is relentless, lurid and very real, far removed from the polished cliché of standard Hollywood fare. It is not a movie for the squeamish or faint of heart.

A two-hours-plus movie about five dudes in a tank was never going to pass the Bechdel Test, but Bradders does spend a significant amount of screen time with his shirt off, if that’s the kind of thing that floats your boat. It’s not without problems – Ellison’s transformation from principled pacifist to Nazi-killing machine stretches credibility somewhat, and an exhilarating climax is let down by a nonsensical deus ex machina resolution (you’ll know it when you see it). But this is just nitpicking.Fury is a gritty, emotionally affecting tale. It boasts a number of impressive set pieces and some fine performances, not least from Pitt himself.

It’s been a while since we’ve had a really good war movie. Fury isn’t it, but it comes close.