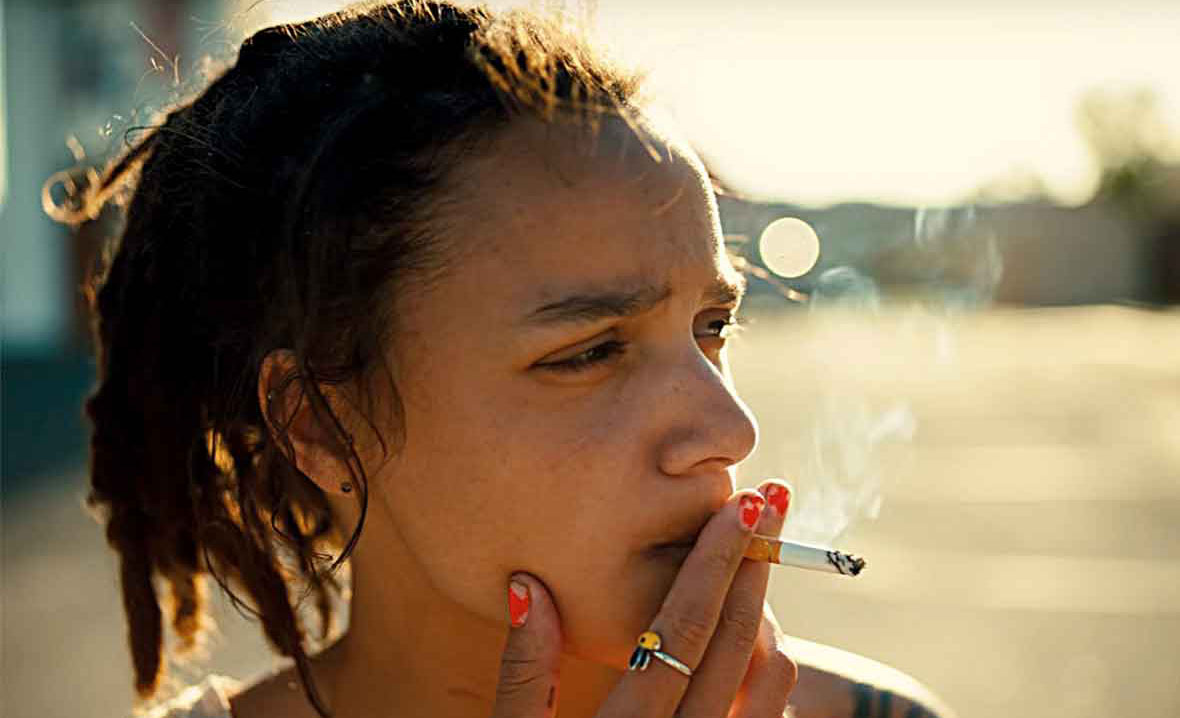 A road trip that's not worth the journey.

Andrea Arnold might have started out presenting Saturday morning children’s TV back in the 1980s, but she’s come a long way since. Once she swapped sock puppets for realist miserabilism the British director won the Jury Prize at Cannes with her first two features (Red Road and Fish Tank), and this year she has scored the hat trick with American Honey.

For this aimless odyssey, Arnold moves from the tenement slums of her home country to the American heartland. The titular American Honey is Star (Sasha Lane), a teenager living below the breadline in Oklahoma. We find her dumpster-diving for food to support her two small step siblings and a sexually abusive father. When she spots Jake (Shia LaBeouf) and his crusty crew of magazine sellers, there is an instant spark of mutual attraction based on bad hair (she with a dreadful headful of dreadlocks, he with a hideous rat’s tail). Jake and Star seal their courtship with an impromptu Rihanna flashmob inside the local Walmart, and she takes off to sell magazine subscriptions door-to-door across America.

As with all of Arnold’s previous work, American Honey addresses issues of poverty, and the lack of choice or opportunity that comes with it. Taking off in a van towards the unknown is seen as a chance of escape for Star, but is simply the least worst option available to her. She is a character without control over her destiny, swept along by the current. She also lacks any self-preservation instincts and readily dives headlong into dangerous situations without any thought of personal safety. But things inexplicably work out for her. This near-magical ability to come out of any dangerous situation unscathed seems more than a little disingenuous in a film so preoccupied with gritty realism.

Director of Cinematography Robbie Ryan has updated the antiquated 4:3 Academy Ratio for the Instagram selfie generation. It’s a format that lends itself well to close-ups, but is not so great for wide shots. No matter, this is a story told from Star’s perspective, and we see what she sees. The tight frame gives love scenes between Lane and LaBeouf a deeply personal and intimate feel. If Arnold’s camera loves Star, then it’s easy to see why. There’s no sense of Lane “acting”, and this first-timer is completely at ease in front of the camera.

If you can get past the horrible hair, then LaBeouf isn’t half bad either. Sadly the same can’t be said about Riley Keough. As the lady boss Krystal (with a “K”), Keough is obviously intended to be an intimidating presence and love rival for Jake’s affection. Her manipulative hold over Jake – implied in a truly bizarre scene involving the application of fake tan – is neither developed nor explained, and Keough is simply awful in the role.

At nearly three hours long, American Honey is a massive undertaking. but it simply doesn’t do enough to earn the effort. With the exception of Jake, Star shows no significant connection with any of her fellow travellers. Neither is there a sense that her prospects have improved by the time it grinds to a halt. There is little sense of growth or development, just an aimless, mind-numbing repetition. Yet Arnold doesn’t seem to know when enough is enough. Nothing has been left on the cutting room floor and the endless improvised footage goes nowhere. Unforgivably long and dreadfully self-indulgent, this is a road trip that’s not worth the journey.